You are here: Home / Journal / The Carpenter and the Family. 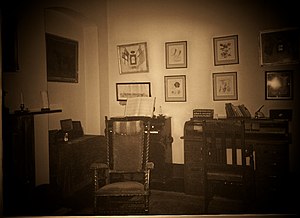 I started hanging out with my friend Vanessa a few years back after one of her drunken adventures left her stranded in a cold winter night. I told her this random story with no direction in mind to take her mind off the scary incident. So, without further ado, I bring you The Carpenter and the Family.

Once upon a time, there was a family who lived in a house on the hill in the foggy town of Nelsborough. One day, a carpenter received a fax request for work in that house. The request was a peculiar one; he was asked to mount carpet on one of the living room walls. Now, nobody ever heard from the family who lived in the house on that hill and they don’t usually make requests, but the carpenter needed the money. So he packed his tools and drove up the hill.

After ringing the doorbell, a friendly looking man answered the door and invited the laborer inside. The wife had tea and biscuits ready and waiting on a tray in the foyer. Their daughter was shy but friendly and showed off her dolly. After having his tea and biscuits, the carpenter decided to get to work.

The family had covered all the furniture in plastic and made room for him prior to his arrival. Every once in a while, the carpenter would get checked on by the wife and had his tea refilled as he worked. He thought to himself that they seemed nice and wondered why they never came into town. Just as he applied the last of the carpet to the wall, he stood back and marveled at his work while he heard the wife enter the room to check on him. When he turned around, nobody was there. Curiously, he went into the foyer and nobody was around. He went to the kitchen and came up empty as well. Wondering if they were upstairs, he called out to them but received his own echo as an answer. He went upstairs and searched all the rooms but no one was to be found. He returned downstairs to the living room and saw a young boy standing in the middle of the room staring up at his work.

The boy turned around and look at the carpenter quizzically. “Hello. Who are you?”

“I’m the carpenter. I don’t remember meeting you when I came in here. Where is your family? I can’t seem to find them.”

“My family?” The boy asked in confusion. “I have no family.”

The carpenter was taken aback. He looked around the room while thinking of how to respond when he noticed the pictures hanging on the wall. The pictures were of the family, but something was amiss. He rubbed at his eyes with his hands and noticed all the pictures only showed the boy with the carpeted wall in the background.

“That can’t be,” he muttered under his breath. He turned his gaze back to the boy, who continued to stare at him in confusion. Suddenly, the horrible truth about the family in the house on the hill dawned upon him.

THE BOY WAS THE FAMILY!!!

WTF. She did the drinking but I think I was the one that got drunk. 😛